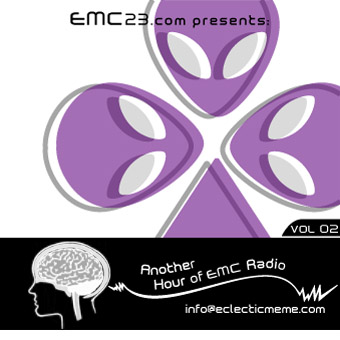 The inevitable sequel. So will we fall foul of our own egos and our need to make a million. Rehash the first success, add a few new characters and come up with a catchy title? Sure!EMCradio is proud to present:
Son of An hour of EMCradio , Return of an hour of EMCradio, The EMCadio hour returns, EMCradio begins, Now that's what I call EMCradio Vol:67...
Keep a look out for Tee-shirts, Badges, Mugs, EMC breakfast cereal and collectable figurines in a store near you \m/(^_^)\m/
www.emcradio.com

001 Plunge - Pain is a Megaphone
"C.S. Lewis wrote a book called the Problem of Pain. In it, he says, "God whispers to us in our pleasures, speaks in our conscience, but shouts in our pain: it is His megaphone to rouse a deaf world." If you've been through difficult times in life, you don't have to see it as some kind of Cosmic punishment or sadistic retribution, just learn from it and move on".

002 Max el Belga - Les Jeux Permits
"Oh, dear, the end is near!" I can hear you think...
But no, the reason is plain simple: this month's song contest at KvR [Feb2006] is about doing something you have never done before, in music. Well I've never done something classical... and in 3/4 tempo... Now every (old) rock guitar player plays also something classical: "Les jeux interdits! That "classical" tune, you can play on 1 string! I took that damned thingie as a starting point to open the door to inspiration... I used my Yamaha EZ-AG to trigger the sample bank of my antique classical Hofner (with birds eye maple sides and back). I recorded 2, 4 to 6 bars at a time, in max. 3 takes (at the end of the session, the sweat stood 2 inches high in my shoes)!

003 de la Mancha - Stoopid Fecking Trumpit
"Downtempo breakbeat from the odd skool, the result of an administrative error at the Nonsense Factory. Glitchy noises, fuzzy buzzyness, a broken trumpet and an organ that doesn't belong."

005 Riadsala - SuperCyberFunkyFing
"I'm a 23 year old producer based in Edinburgh, Scotland. My music tends to vary a lot, either attempting to make eclectic funky dancy stuff (this is probably my best effort!) or making melodic, epic, electronica stuff."

006 Parallel Worlds - Nightfall ...Walking alone on a desert beach, near midnight...Written & produced by Parallel Worlds. (This track is a very remixed version of an original track called "Nihtose" by Subbuteo Pervert.)

007 Knockman - Never be Rude to the Sun
"Never be Rude to the Sun" is a kind of 'existential pop' song that probably fails on both counts; I didn't want to write a protest song, I prefer to address something through oblique references and provide lyrics that can be melded to meet each individual's own set of interpretations. But don't worry, it's primarily meant as entertainment so I did try to make it sound nice. I was happy with how the sound and structure came together as there's not a great deal of instrumentation, and its switch from ambience to linear rhythm was inspired by Scott Walker's "Climate of the Hunter" album which has a fabulous elegance in its stark sculptured sound. Thanks for listening".

008 Liqih - The Dub Kids
"The Dub Kids was a fun experiment in one of my favourite genre, Zvon gave me as gift those nice kids voice samples and I felt they would fit in a happy psychedelic DUB track, early Pink Floyd albums have some rhythmic patterns made with funny voices, mostly their own voices tweaked, but I used the kids voices as they are, trying to get the best groove from their natural expression".

009 Scuzzphut - String Thing
"String Thing was written and recorded in 2003 as a first experiment with some new recording software. That first experiment turned into one of my favourite of my own tracks, as these things have a habit of doing. I had wanted to combine strident, melancholic strings with an undercurrent of breakbeats and bass, a combination I like so much that I returned to it since for the unimaginatively titled "String Thing 2". I think the first one still just edges it for atmosphere and restraint. If I allow myself, I can become quite emotional listening to this one. :-)"

010 Fortyone - Simply for Amusement
"As the non-sensical surface noise of meaninglessness sooths the soul of the purpose driven life we ask; "Simply for amusement?"... Yes! That's what it's all about. Or not, I'm not sure. But it very well could be and we can do it over and over and over again, simply for amusement. And as the happy, seemingly mismatched madness loops again and again we're reminded that life requires no purpose, no meaning, no reason, and that pure joy and fun can come from living just for fun- Just for amusement. And even this message I do not wish to convey. This music truly means nothing. Alright? I really don't understand..."

011 x19524 - Dance By The Fire
"I made the drum loop in Guru but didn't know what to do with it for months, under the creative name of 'Idea no.14'. When I did eventually knuckle down to working on it the ideas came thick and fast and pretty much structured it in one night. Then a few weeks of tweaking, adding and removing drums and percussion and deciding how to end it, as you can hear I decided to let it die out like a fire. The fire sample itself was a last minute idea; the owl hoot at the end was in the fire sample and added to the atmosphere so it had to stay. I played it one night and thought I heard a wolf howl in it. There wasn't but the thought sounded so good I put one in and that's how it stands for now. Slightly influenced by Alan Parson's Luzifer."

013 Beardedone - GlennGaryJoe
Done for a contest promoting BFD - tracks with no drums. No DRUMS!!!!! WTF?!! This is modern jazz in the sense that there's no apparent usage of the usual jazz instrumentation. Finely combined live and acoustic samples and plenty of rhythm suggested in the various layers of melody. Jazz lovers in any form should get a kick out of this.

015 Thomekk & Watto - Seen
"Seen was originally composed by Thomekk as a dark, brooding instrumental piece. Watto, after being asked to sing on it, was inspired to add a few things, take a few things away, add a few more things...and a collaboration was born."

016 Theory of One & elv - Distant Peace
"The tune was composed and performed by elv. I liked the melody so much that I was inspired to write a poem that I sent to elv. He asked me to recite it with the song. He was surprised when I sang it instead! Fortunately he was pleased as well and so it was posted at the Auditorium with the release of my album "Just Be" which featured the tune as a track".